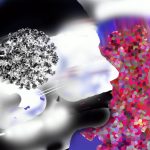 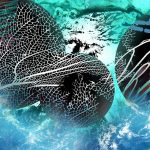 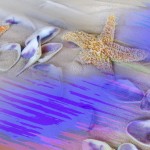 This new image visually contrasts flowers and the aging technology of the electrical grid. These flowers, although thin and wiry like the transmission lines, are animated and lively. By comparison, the towers appear to be an ancient construct. As the window for preventing dramatic climate warming closes, the energy transmitted through the grid continues to be produced by a 63% blend of fossil fuel and nuclear, rather than environmentally friendly renewable sources.

The electric grid in its current state brings to mind the over year-long recovery of Puerto Rico from the destruction of category five Hurricane Maria. The island grid was almost totally destroyed. The power has not yet been restored to all of its citizens. Puerto Rico, vulnerable to storms, is also rich in renewable sources such as wind, solar, water, and biomass. Still, with our current laws, FEMA is required to restore power to match the destroyed system exactly as it was.  And so, the government is currently rebuilding the grid without updates. Tall towers are being built in inaccessible areas such as mountain tops in favor of more manageable local grids fueled by solar or wind. In addition, the importing of expensive fossil fuel needs to continue.

In spite of these FEMA requirements, philanthropists and private companies have come in to help. They donated roof-top solar systems, which form small renewable grids. This technology has helped some neighborhoods regain their electricity. While Puerto Rico’s energy problems and recovery are an extreme example of lack of economic and environmental foresight, I hope that we as a nation can learn from these missteps. 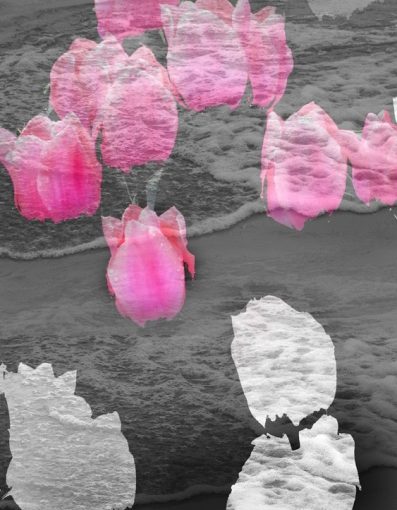 Who doesn’t appreciate the beauty of flowers? Their bright colors and enchanting scents attract insects and humans alike. The curving lines and multiple patterns of flowers invite me to utilize them as subject matter for my art. Why then, for this new art print, have  I borrowed the title of Pete Seeger’s enduring anti-war anthem, Where have all the Flowers Gone?

In an ironic twist, the meaning for my art is different, but no less dire. Instead of all the flowers finally going to graveyards, my collage portrays tulips fading and being swallowed by the ocean. It also incorporates a severe color palette of pink, black and gray. Therefore, it asks the question, what will happen to the flowers, fields, and coastal cities as the sea rises to claims them?